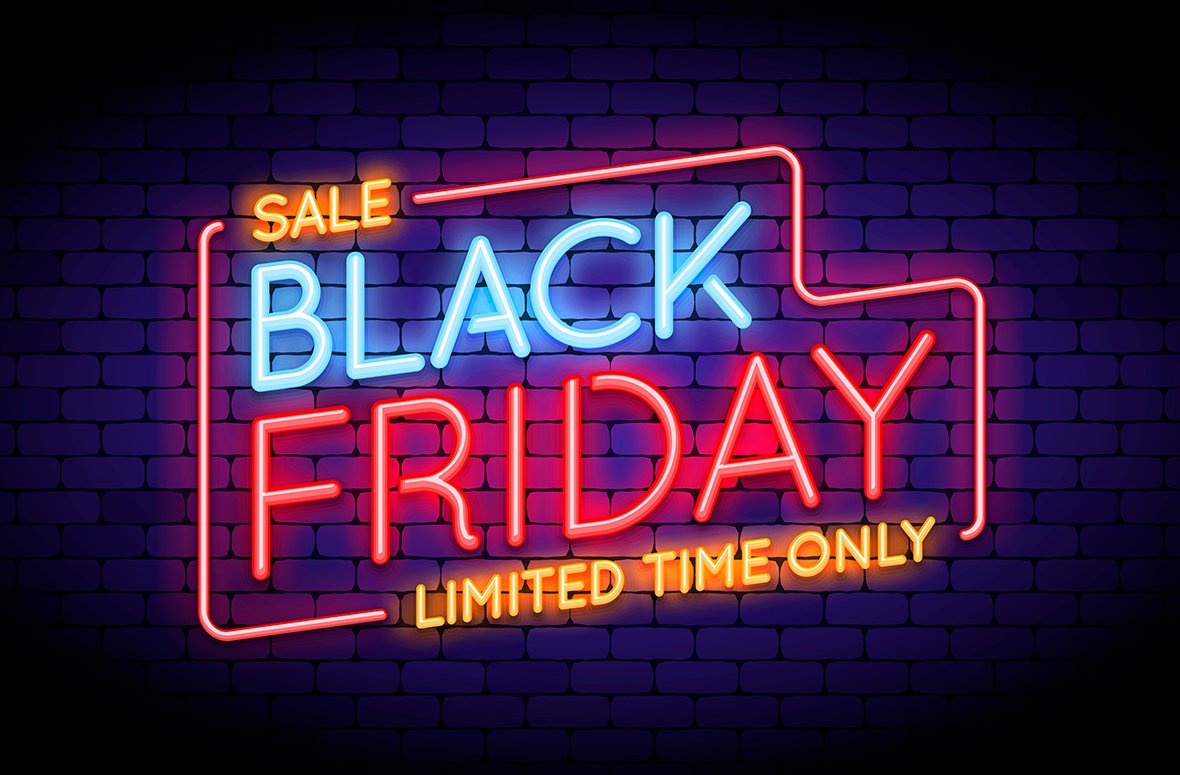 As we enter Black Friday 2019, it’s worth taking a look at how the biggest peak in the retail calendar is likely to pan out for retailers and consumers, and ask ourselves some key questions that arise around the annual November shopping jamboree.

Following the trend of previous years, Black Friday 2019 is shaping up to be the biggest yet. Sales via online channels alone are forecast to reach £4bn across the Black Friday to Cyber Monday period; more customers are shopping online, with per capita spend also likely to increase. Our data suggests that about 60% of all online shoppers will make a purchase during the Black Friday period, and that the average spend will rise from around £100 to c.£250.

But is this just the retail market being bombastic with its predictions? We know, for example, that sales across the September and October period slowed… unsurprising given the prevailing economic and political uncertainty. So, what’s the lie of the land as we head into the most critical retail period of the year?

Undoubtedly, the unstable political climate we find ourselves in is not conducive to confident shopping and spending. Brexit alone would be bad enough to make customers spend with a little bit more care, but add into that an election, and will we see customers’ buy buttons paralysed by fear?

Whilst Brexit delays caused a collective groan amongst the electorate, for retailers with an eye on Black Friday, the fact that departure from the EU was shelved until after Christmas was good news. Had we exited on the 31st October, who knows what the challenges of stock, inventory, supply chain and border control management might have been. But a delay has meant that we can move through the Black Friday period with everything as it was.

With so much uncertainty about the fallout from Brexit, there may be a degree of stockpiling going on this Black Friday. Our data from last year also showed how consumers used the discount period to do their Christmas shopping.

We would also argue that, having endured a tough 2019, retailers will be even more desperate to ensure that sales are high and that old stock is moved out over the Black Friday period. For consumers this means there will perhaps be even better deals to be had than normal.

Where are the deals likely to be?

Most retail peaks tend to follow similar trends, with the heaviest discounting seen in TVs, laptops, smartphones and toys.

Amazon of course will promote its own products, most notably its Alexa enabled devices, and continue to push the categories into which it is desperate to make inroads – particularly fashion and clothing. Prime members will also get exclusive access to Lightning deals – so, for the 49% of us who are Prime members, we need to keep our eyes peeled.

Curry’s PC World had a stellar 2018 Black Friday period and will be eager to repeat its success. Coupled with the fact that Christmas is the perfect time for that new TV or laptop, it needs to drive sales during this period. Its strategy will be focused heavily around the new 4K UHD TVs

Argos, having endured some tough trading this year, has already begun to offer discounts. Whilst some might argue that this looks like the act of a desperate retailer, others might say that this just makes good business sense, ensuring Argos’ deals don’t get lost amongst the flood of others that will follow over the Black Friday period.

When can I start shopping?

Despite “Black Friday” starting on the 29th, Amazon’s Black Friday deals kicked off on the 22nd of November. And many retailers – including Curry’s and Argos - are getting ahead of the curve by offering pre-Black Friday deals, and exclusive access to early deals for signed up members.

Smaller and niche retailers often try to “beat the crowd” by discounting in advance of some of the larger retailers. This makes a lot of sense – but shoppers therefore need to be on red alert even now. Any deals to be had right now may not make it as far as Black Friday.

With 13% of all online shoppers (and 20% of Prime members) currently using voice assistants to buy products, voice commerce is set to have its biggest moment in the sun, contributing £100M to this peak sales bonanza.

As mentioned, one of the key areas of focus for discounting, certainly for Amazon, will be its Alexa-enabled devices. The Echo Dot for instance is already massively discounted. Discounting of such products must also be seen as a ploy by Amazon to infiltrate your house and “own the interface”. With 40% of online shoppers expected to start making purchases through voice in the next 2 years, it makes sense for Amazon to prioritise making sure as many people as possible have one of its devices in their home at the expense of some of its competitors like Google or Apple.

Is now the time to sign up to Amazon Prime?

If you’re not already a Prime customer (and 49% of us online shoppers already are) then one question to ask yourself is whether now is the right time to sign up. Our research indicates that across a variety of metrics such as price, delivery, customer service and returns, Prime customers view Amazon more positively than non-Prime customers. Prime members will get the benefits of exclusive lightning deals, not to mention faster delivery. And don’t forget of course that more rewards can be reaped on Amazon Prime day in July.

One of the curiosities of Black Friday is that despite its enormous importance for retailing in the West, it is miniscule when compared to China’s Singles Day. Just to give some perspective, Alibaba hit $1bn of sales in just 1 minute 8 seconds, and its total sales across the one day soared to $38.4bn (vs $30.8bn in 2018). So, what effect does the mother of all retail peaks have on us here in the West?

One of the key reasons why Singles’ Day hasn’t resonated (yet) with Western audiences is its date. Originally started by single university students who chose the date of 11.11 as it comprised all ones, this date has a very different significance in the West.

But we have started to see Singles Day deals quietly appear online. As a football enthusiast, I was targeted with a singles day deal by Pro:direct, and with Alibaba’s expansion slowing creeping West, it is almost inevitable that some form of Singles’ Day retailing will hit us soon.

While for us consumers Singles’ Day may not be that well known, for our retailers it’s an incredibly important time, especially those with presences on sites such as Tmall. One of the key drivers of purchasing on Singles’ Day is Chinese consumers purchasing Western goods at discount prices.

And talk about an experience – while customers in the West are having their appetite whetted by early deals, Alibaba launched its Singles Day activity with its gala event featuring Taylor Swift.

Is all this spending right?

Based on the political and economic instability that we are facing, is driving sales through discount events morally right? Do customers really need the deals that are being offered to them? And aren’t retailers just tempting customers who would be better advised holding on to their cash right now?

One argument is that having narrowly avoided a recession in the last quarter, our economy needs a shot in the arm, for all our sakes. But one can’t help but feel that the noise surrounding Black Friday adds pressure to consumers to purchase. Sure, a new 4K UHD TV would be great, but is it really required?

Some others might argue that ahead of Christmas, we all need to get the presents for our loved ones – and if these can be bought at a discount then that’s a win for us all. Our data around stockpiling would support this.

And what about the environment?

But while we’re talking about ethics and morals, it’s important to highlight that our research tells us that the younger generations are increasingly looking to retailers and brands to behave ethically and responsibly. In fact, 18% of 6-16 year olds said that they wanted to buy products that were sustainable, while a huge 66% said that they wanted to buy from companies that were doing good in the world.

With our roads likely to be flooded with online orders in the days after Black Friday, retailers need to communicate how they are off-setting their carbon-footprint caused by their increased activities. Could we see in the future more emphasis on communicating this upfront, and the rise of the “ethical discounter”?

Make sure you get it right!

For many retailers, as well as being the period to make hay while the sun is shining, it’s also a period of enormous stress. It’s when processes, systems and people are tested to their absolute limits. Fail, and you can say goodbye to a significant influx of cash. So, some elements that need to be considered are listed below:

What do all these shopping events tell us?

Well firstly, it tells us that customers like discounts. Getting something that should cost more, for less, gets the dopamine flowing.

It tells us that as we’ve transitioned from exclusively physical retailing to online retailing, we have forgotten about some of the more traditional physical shopping peaks like Boxing Day and January sales. This void has been filled with these new, easily accessible sales peaks. The new retail landscape now has three major peaks – Prime Day, Singles Day and Black Friday.

It tells us that irrespective of the political and social uncertainties, us customers love to shop. Provide us with the right deals at the right time and we’ll open our virtual wallets to you. And while buying more stuff, and increasing the amount of credit we use is not always the right thing to do, for our retailers, our jobs and our economies, we need it.

Bring on another Black Friday boom to cut through all the worries in Brexit Britain.