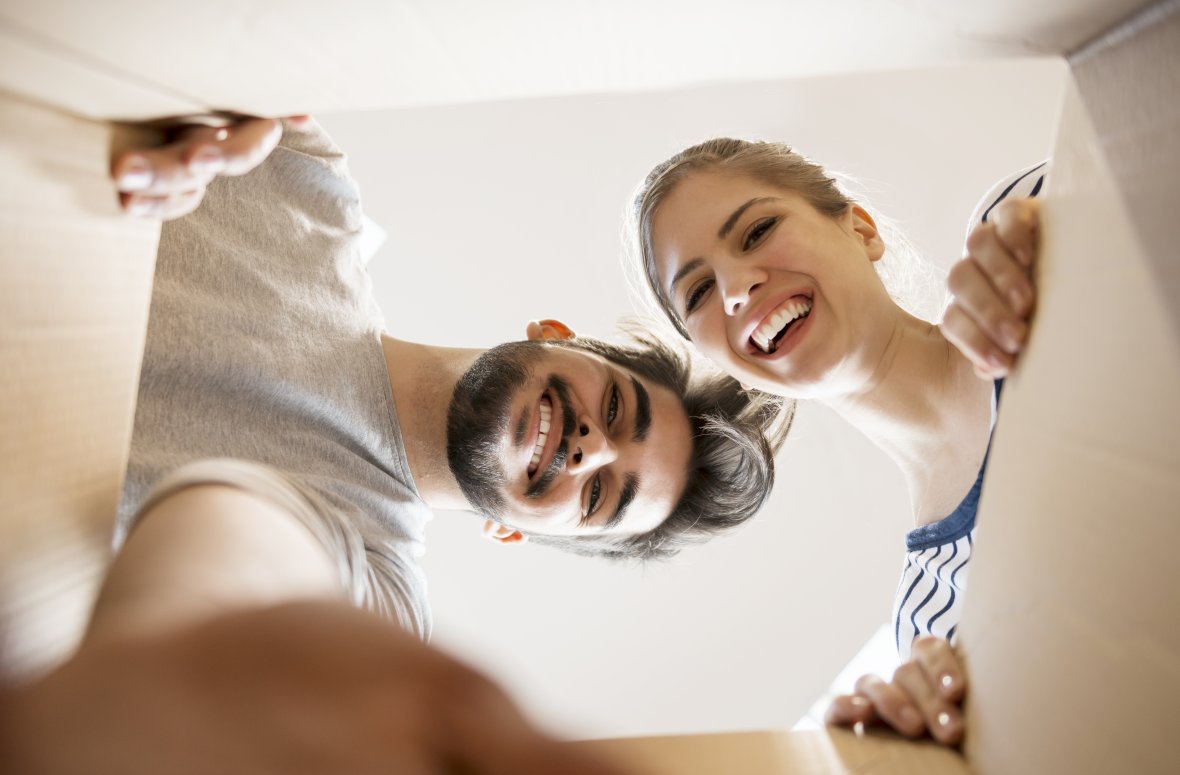 Amazon Prime has become a major force in global eCommerce in its own right, with Amazon stating they have over 100 million Prime members worldwide.

In our research of more than 3,500 UK and US shoppers who shop online at least once a month, 35% of UK and 74% of US shoppers stated they are Amazon Prime members. Whilst this does not represent the total Prime population, it gives us a great insight into the behaviours and motivations of a very influential group of online shoppers.

Amazon Prime members - who are they?

Millennial shoppers (in the 25 to 34 age group) make up the highest proportion of Prime members across both the UK (37%) and USA (47%). Younger shoppers (aged 16-24) in the UK, meanwhile, have embraced Amazon Prime to a greater degree than their US counterparts. 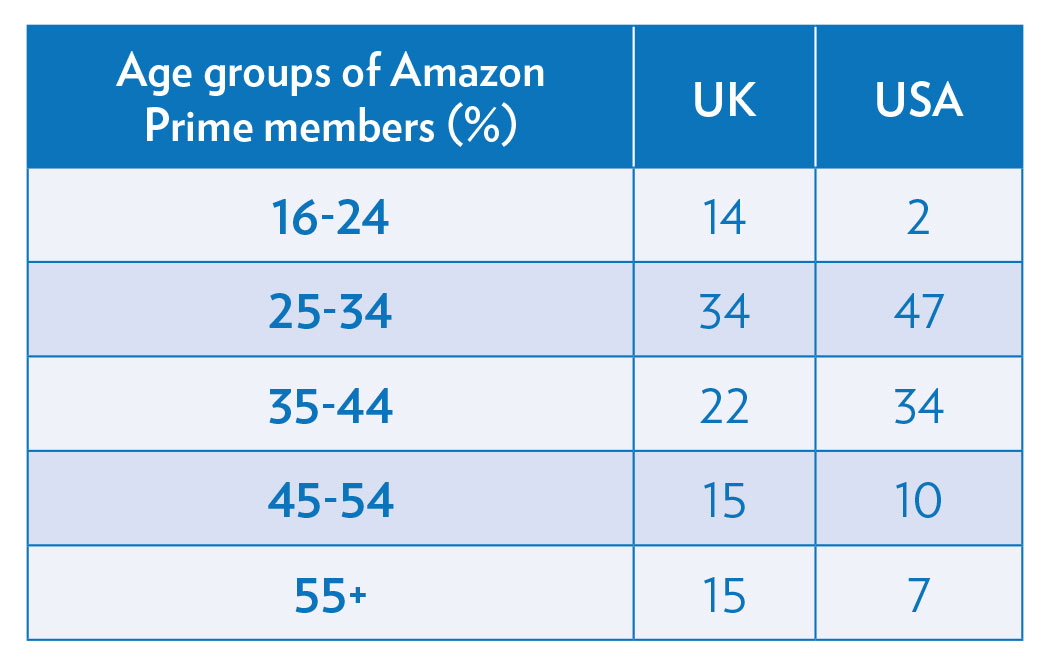 Our survey found Amazon Prime membership was more common amongst male shoppers, particularly in the USA where 59% of members are male and 41% female. In the UK it’s a more balanced 52% and 48%.

A similar picture emerges for the amount of online spend that goes through Amazon, with Prime members not surprisingly choosing Amazon as their platform of choice. In the US, Amazon absorbs a staggering 55% of all online spend from Prime members, and 45% in the UK. Even amongst non-Prime members, this figure is considerable - 41% of overall digital retail spend in the US and 32% in the UK, underlining the apparent stranglehold Amazon has on the eCommerce ecosystem.

Loyalty to the Amazon service is compelling too, with 93% of US and 84% of UK Amazon Prime members agreeing with the statement “I’m more likely to buy from Amazon Prime than I am to buy directly from a retailer’s online site.”

So, what makes Amazon so compelling, especially to Prime members?

Our research examined certain aspects of online shopping and their importance when it come to the decision to make a purchase.

Price stands out as the most important factor, with 67% of US and 60% of UK Prime members rating it as very important to their purchasing decision.

As Prime members are offered free next-day delivery on many items as part of their membership, it shouldn’t be a surprise that cost, and speed of delivery are also ranked high in terms of what shoppers consider the key ingredients in an excellent online shopping experience. Rankings were consistent across countries. 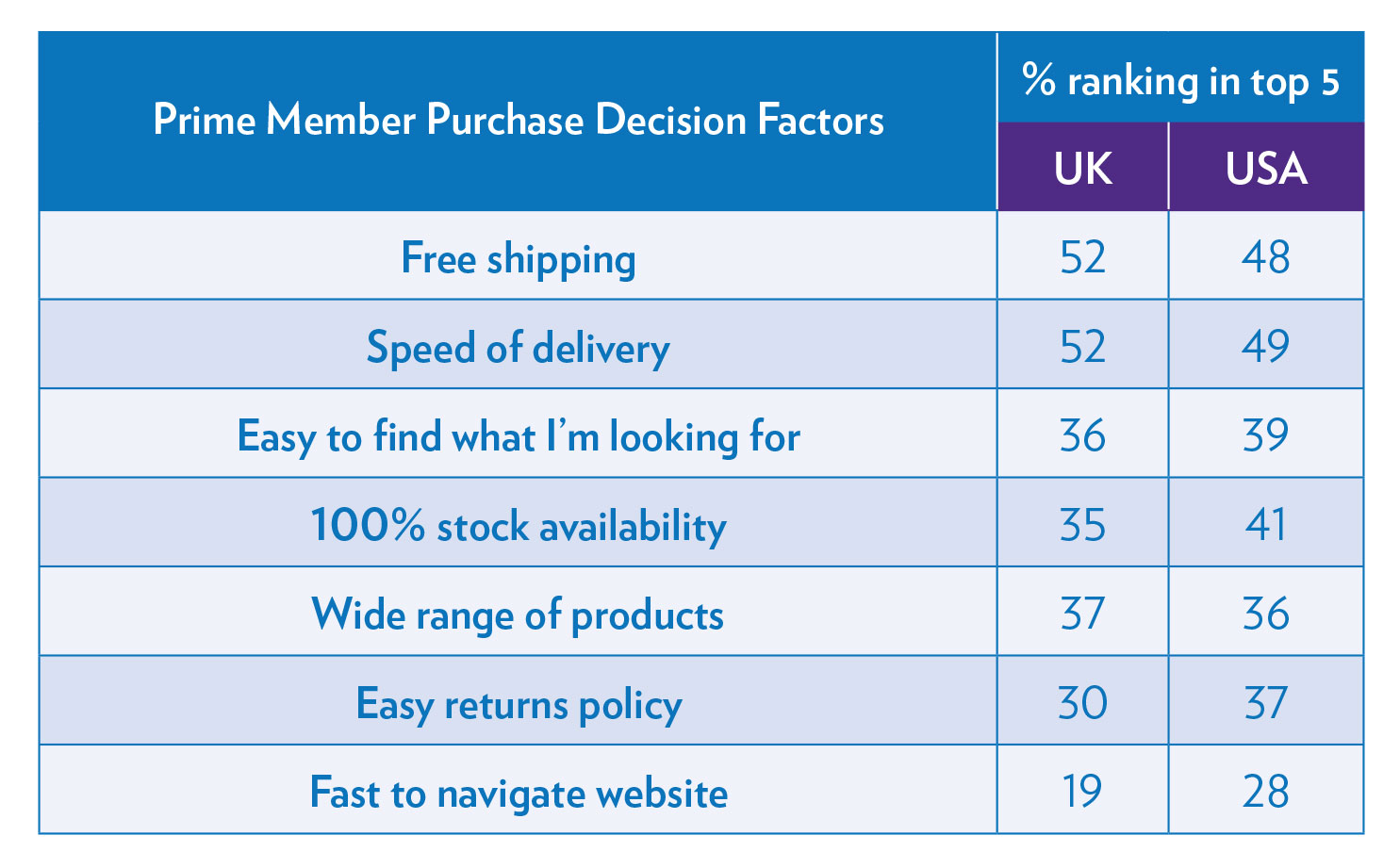 How do Amazon Prime shoppers shop?

When asked where they start their online shopping journey, it is interesting to note that Amazon Prime members are not only loyal to Amazon when it comes to purchasing, but also use it as their main avenue for product discovery. 71% of Prime members in the US and 50% in the UK rank Amazon as the place they are most likely to start their shopping journey. For purchases, these figures rise to 74% in the US and 58% in the UK. What this does suggest is that US Prime members are more loyal to Amazon in their shopping habits than their UK counterparts.

Amazon’s dominance of product search even extends offline, underlining how it has set the standard for product information, pricing and listings. A whopping 94% of US and 85% of UK Prime shoppers admit to checking Amazon reviews and pricing even when shopping on other sites or in a store. Even amongst non-Prime members, 77% of US and 67% of UK regular online shoppers check Amazon wherever they are browsing.

It is interesting to note the differences across categories in how and where consumers shop online. In the Entertainment and Tech categories, Prime members told us they did most of their shopping on online marketplaces, another sign of Amazon’s dominance. In other categories, such as Grocery and Luxury, Amazon does not enjoy quite the same hegemony even amongst Prime members. These figures suggest there still remain growth opportunities for Amazon, but also that there is potential for brands looking to target direct sales. 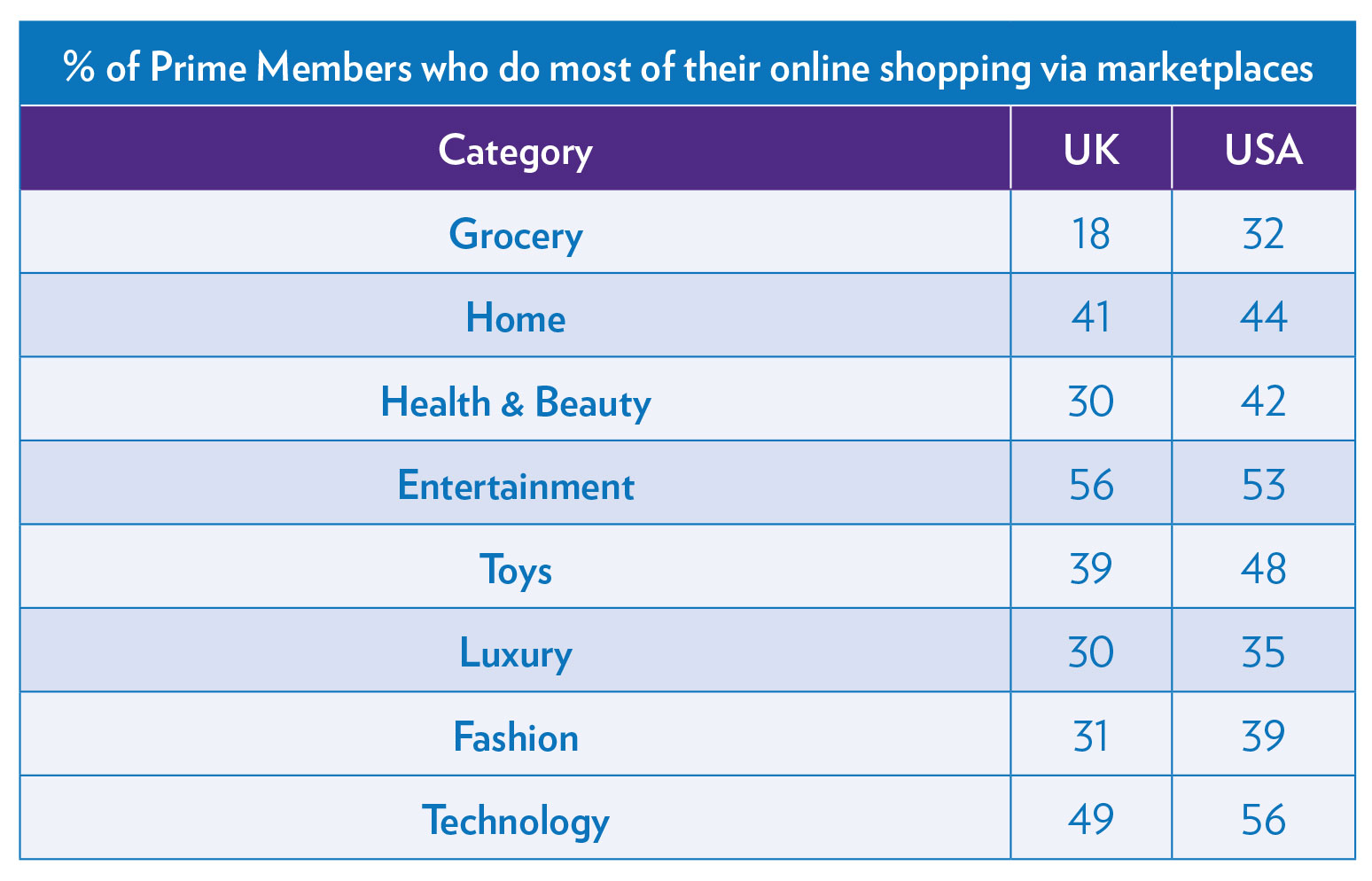 How far can Amazon go to capture the wallet of its Prime members?

It would seem that the Prime members who took part in our survey are a progressive lot, with 77% of UK and 91% of US Prime members stating they are going to increase their use of digital channels in the future. But which channels will benefit most? The fact that 79% of UK and 92% of US look forward to being able to order all of their goods through one retailer suggests Amazon may be able to increase its market share still further.

Another factor that suggests Amazon could strengthen its increasingly dominant market position is the rise in use of voice activated virtual assistants in eCommerce.

Amazon Prime members are leading the way as adopters of voice technology on devices such as Amazon Echo. 32% of UK and 51% of US Prime members currently use this technology with 57% of UK and 78% of US respondents stating they would feel comfortable shopping via these devices.

The next step down the route of AI-powered eCommerce is order automation - are we heading towards a future where machines automatically do our purchasing for us? It seems Prime members are fans of this concept, with some already adopting it. 13% of Prime members in the UK and 25% in the US are now making purchases using automated machines, with 59% of UK and 79% of US Prime members interested in home appliances that automatically re-order products when they run out. (It’s a concept that Salmon has termed Programmatic CommerceTM). And to take this idea one step further, 50% of UK and 73% of US Prime members state that they would be happy to allow someone to deliver and stock their fridge with groceries whilst they are out.

How can brands and retailers combat Amazon?

Our survey underlined how strong the affinity is between Amazon and its Prime members. The potential for Prime membership to grow is a major concern for brands and retailers looking to control their own share of the eCommerce market, and begs the question of what tactics are available to pull these shoppers to channels other than Amazon.

The Prime members we spoke to, just like online shoppers in general, are concerned about Amazon becoming too dominant, with 61% of UK and 69% of US Prime members stating they are worried about the likes of Amazon growing too big and stifling competition.

When asked for the main reasons they would choose another retailer over Amazon, the top reasons cited by Prime members were: cheaper pricing, more attractive loyalty programmes, more convenient delivery options and better product range. 26% of respondents in the US and 18% in the UK also stated that they prefer in-store experiences.

In any case, businesses would be wise not to singularly focus on an Amazon marketplace strategy. To give yourself every opportunity to win the battle for the online customer, we would advocate developing a balanced approach across three main channels - retailer websites, own brand sites (ie. direct to consumer) as well as marketplaces. Amazon veteran Eric Heller of Wunderman Commerce’s marketplace consultancy Marketplace Ignition reinforces the point: “A balanced strategy gives you presence where your customers are, and reduces over-reliance on one or two channels. Marketplaces like Amazon aren’t a replacement for other routes to market but a critical part of a holistic strategy. We know consumers are looking there for research and some are shopping there. By fully operating there and on other channels, brands get a complete picture of what shoppers are saying about their product, who is buying it and how to best go to market.”

There is no escaping just how big an impact Amazon Prime is having on online retail, and especially in cementing Amazon’s position as the dominant force in eCommerce. Amazon Prime presses all the right buttons in what online consumers want from the digital shopping experience – competitive prices, convenience, fast delivery, a single platform that combines product search, research and purchasing, in one.

Prime can be seen as an extremely successful loyalty programme, with members using Amazon more frequently than other channels and spending more money there than anywhere else. But it is also a driver of innovation, establishing behaviours that are ahead of the curve in digital commerce. The Prime members we spoke to included early adopters of voice technology and automated ordering, with the spoils of these innovations again mainly going to Amazon.

Is Amazon Prime a threat to the rest of the eCommerce ecosystem? It certainly sets the standard, and has played a key role in helping Amazon grow its already considerable market share. But rather than viewed as a threat, brands and retailers should look to Prime to rethink and fine-tune their eCommerce proposition. Consumers still want choice and variety, they want other channels to step up to the plate and compete with Prime, and they even know exactly what would entice them away from it – cheaper prices, better loyalty benefits and better delivery options.

Amazon and Prime have set the standard. It’s a gold standard for what works and what shoppers want. It also presents a benchmark to the rest of the online retail industry, indicating where there is room to catch up, match and even surpass this seemingly unstoppable tech titan.

Salmon, a Wunderman Commerce company, has a team of eCommerce multichannel experts who are working with leading brands to address both the opportunities and challenges addressed within this article. These are explored amongst other key themes in its ground-breaking, new report “The Future Shopper”.

In this report, we asked over 3,500 consumers from the US and UK aged between 18-64, and who shop online at least once a month, about everything from automated purchasing and the dominance of Amazon, to the rise of voice-activated devices and the shifting shopper priorities.