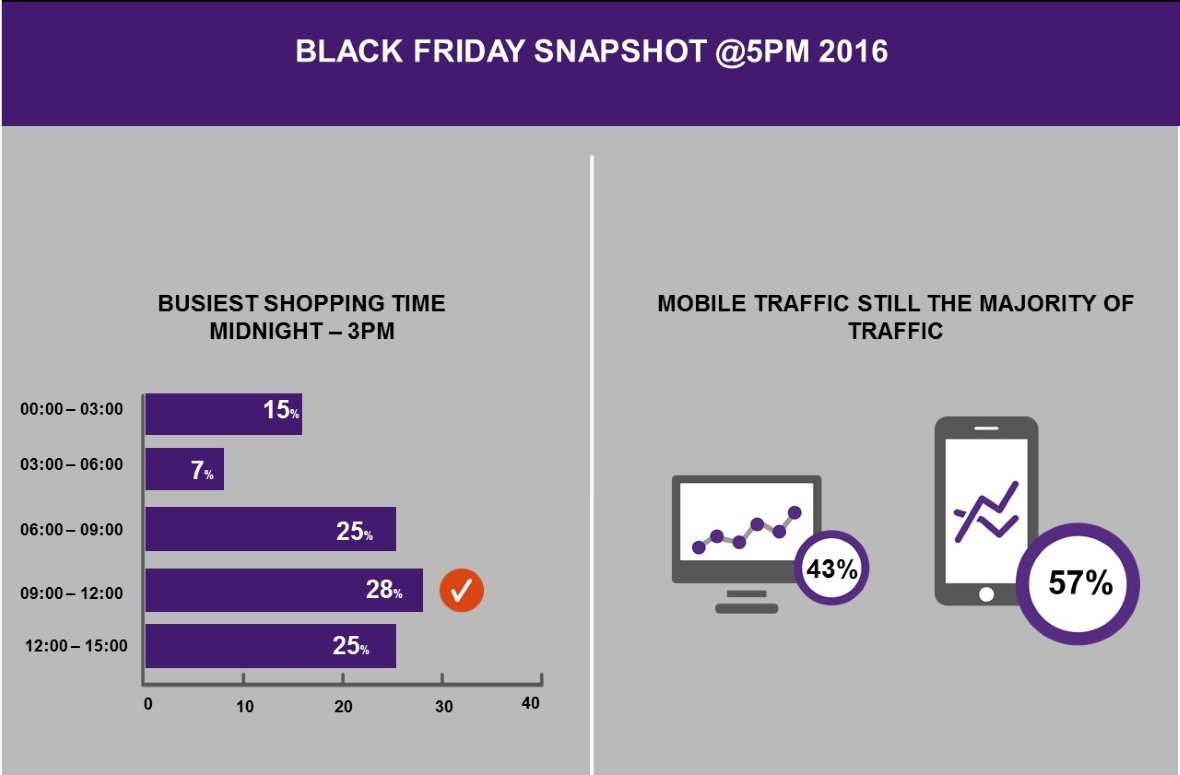 It has been a busy week at the Salmon Peak Operations War Room where Salmon’s, a Wunderman Commerce Company, team of ecommerce engineers have been supporting many of our retail clients with their ecommerce site operations during this intense peak trading period.

We have noted 5 main trends to date:

Salmon has previously predicted that retailers would be spreading out their promotions over a longer period than one day and coined this “Black Fiveday” where we projected £5bn in sales from Thursday 24th through to Cyber Monday 28th.

In fact, several retailers including two of the largest, Amazon and Argos, started promoting deals over a week out from Black Friday.

We did see a spike in orders on Thursday 24th with several retailers having their busiest day of the year so far on that date.

John Rogers, the new chief executive officer of Argos, told BBC Radio 4’s Today programme that there had been 500,000 visits to the retailer’s website in the first hour of online trading between midnight and 1pm - up 50% on last year. The Guardian reports Argos’ busiest hour so far was between 8am and 9am, when it received about 700,000 web visits (80% of which were on mobiles and tablets).

In Salmon’s Peak Operations War Room, orders across a range of retail clients have been steady with 28% of orders being made between the hours of 9am and 12pm, the busiest period so far.

We are seeing two interesting potential impacts of Brexit on Black Friday sales.

We are sensing that buyers fear retailers may soon be increasing the price of goods to take into account inflationary cost increases. Black Friday prices are currently heavily discounted and savvy shoppers are spending early to make sure they are not hit by sudden increases.

2. An increase in international sales.

Several retailers supported by Salmon have reported a significant increase in international sales. Again this could be influenced by Brexit fears and the reduction in the value of Sterling versus international currencies. It is now more economical for overseas shoppers to buy from UK retailers. We have seen increases in international traffic at peak hours across Europe, the US and as far as China.

Salmon predicted this will be the first time when mobile sales outstrip desktop sales - with a total of £2.55 billion Black Fiveday purchases made via mobile. So far, data from the Salmon analytics hub is indicating 57% of traffic coming via mobile devices. The figure for mobile reached the heights of 75% earlier on in the morning but has since dropped as consumers switch to desktop when they arrive into work. We expect it to increase again as shoppers use mobile devices during their commute home.

5. The rise of the Basket Bandits

Another trend being observed by Salmon is the rise of the “Basket Bandit.” These are shoppers who identify items ahead of Black Friday and place them in their online shopping baskets, ready to click ‘buy’ as soon as the items are discounted. These savvy consumers are no doubt aware of possible time limitations on Black Friday deals.

Pre-Black Friday, Salmon saw an 8% increase in basket abandonment compared to the industry average which may indicate this “Basket Bandit” trend. However, we also saw several retailers counter this trend by offering price guarantees.

View what Salmon’s Head of Retail, Patrick Munden, had to say about Black Friday on CNBC this morning