The future of shopping on social media 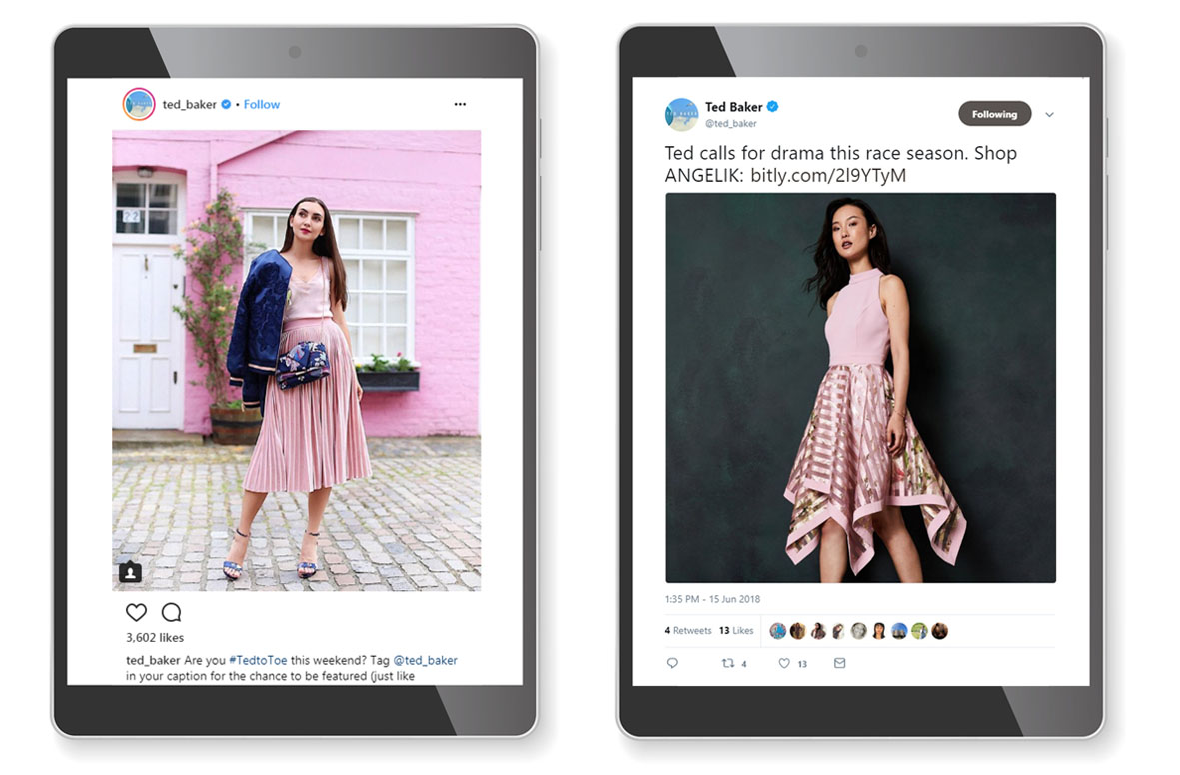 In January 2017, we published a blog post entitled “Making Social Media Shoppable”. We commented on where 3 of the key social media players sat within the spectrum of social eCommerce, and predicted that brands would be investing heavily in creating a social storefront to take the next step in world of online shopping. At the time, Pinterest was ahead of the rest, having rolled out more than 60 million “buyable pins”, but Facebook & Instagram were making moves and gaining ground. The question is, where are they now?

It’s all moving much faster than we ever imagined

The eCommerce industry is seeing explosive growth, far quicker than anyone anticipated. Data from Statista suggests there will be a 246.15% increase in global eCommerce sales from $1.3 trillion in 2014, to $4.5 trillion in 2021.

Back in early 2017, data from 2016 showed that Pinterest was ahead of the curve, after its launch of shoppable pins in June 2015. Since then, it has made multiple acquisitions, adding mainstream brands such as ASOS, Zara, J.Crew & Topshop to its platform.

But in 2017 Facebook relaunched its 'buy now' feature, and has completely dominated the market. The graphs below show how US consumers have switched from predominantly shopping via Pinterest in 2016 to shopping via Facebook in 2017.

It’s simple really. Consumer purchase decisions are significantly influenced by social media, and Facebook has the biggest user base. Continuing to grow at speeds that are seemingly surprising themselves, in May 2018 Facebook had more than 2.20 billion monthly active users, which is a 13% increase YOY, and 1.45 billion of those users log in to Facebook at least once a day. Big Commerce reports that:

The combined influence of social media, and the colossal size of Facebook, makes for a powerful, winning formula.

Similarly to Facebook, Instagram users are influenced by the posts they see. Big Commerce reports that 14% of online shoppers would be likely to make a purchase from Instagram.

After an initial US only trial, Instagram rolled out its shoppable posts to 44 countries, including the UK, Australia, Germany & Canada, in March 2018. A growing number of big brands are now using the innovative Instagram tag system to create a seamless shopping experience for their customers. And the data really does back up the importance of integrating products into imagery; according to research by Gartner-L2, 65% of the top performing Instagram posts (determined by clicks) include products. But there's bigger news afoot...

With the launch of its new Checkout feature, Instagram has triggered what might be considered the end of the beginning for retail through social media - the ability to make purchases within the social platform itself.

Although only available as a beta trial, Checkout could prove to be the tipping point into true social commerce goes native, ie. true social commerce. To date, all the major social media companies, Instagram included, have experimented with commerce features in various forms. Buy buttons, pioneered by Facebook, allow companies to sell direct from their branded pages. Discovery tools like Instagram’s Shoppable Stories allow brands to apply product tags to organic content featuring their wares, with information about the items and a link to an external shopping cart.

Instagram Checkout combines both approaches, allowing consumers to purchase from within the social site or app, turning organic content into selling opportunities, without the additional step of clicking out to a different platform.

Why you need an influencer strategy

Social media influencers can have a huge impact on the products consumers buy. They have a high level of engagement with their followers, produce high-quality, on-brand content, and more importantly have been proven to generate revenue. In 2015 a survey by Tomoson found that for every $1 a business spends on influencer marketing, they make $6.50 back.

As the graph shows below, Instagram is by far the most popular platform that social media influencers use to engage with brands. 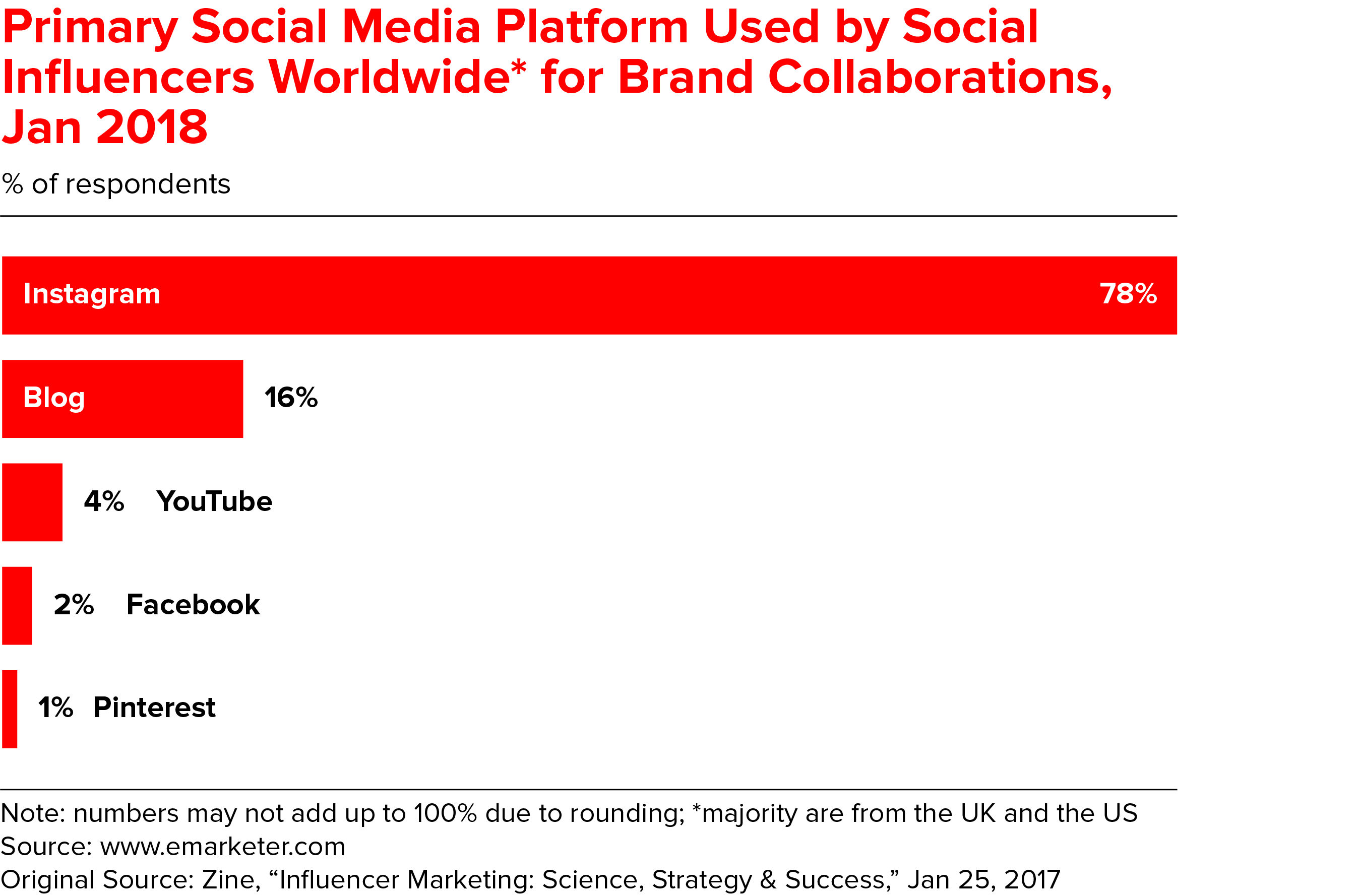 We think it's safe to say that shoppable social media will make up a significant proportion of the predicted eCommerce growth in the next few years. Social commerce (sCommerce) seems to be moving at a faster rate than anything we’ve seen in recent years, and while social networks also continue to grow in size, the potential revenue base will continue to increase.

A next wave of sCommerce for Instagram is already underway. In May 2018, TechCrunch reported that Instagram is trialing a feature that will allow users in the US and UK to book restaurant tables, cinema tickets and beauty appointments seamlessly via the app. In order to do this, they added a native payment feature into the app that lets users register a credit or debit card to begin making purchases without needing to navigate away from Instagram.

Another clear, next step for Instagram is to look at how to allow influencers to tag products directly, just as a brand would, as opposed to using the brand's handle tag as the CTA. Having products tagged directly on both the brand's account and influencer's account means fewer clicks to buy, which could potentially have a huge impact on overall conversion rates.

Although it’s now possible to shop via Facebook, Instagram and Pinterest, we’re still in the early stages of sCommerce, and it will be interesting to see how it evolves.

Instagram seems to be the platform with the most notable development at present. The integration of a native payment solution within the app is a definite game-changer, and businesses need to ensure they have an eCommerce strategy that can adapt to the ever-changing marketplace.

How Salmon can help

Salmon, a Wunderman Commerce company, works with leading retailers and brands to optimise engagement and maximise transactions online through inspired journeys across channels.

Discover how we define ecommerce strategy